Helios launches into The Stratosphere

Send a beer to space?
Why?
Why not?

A little bird recently told me that Hoyne Brewing from Victoria BC was about to release a new beer, Helios, a delicious malt forward Dortmunder named after the Greek god of the Sun.

After spending a an hour or two researching high altitude weather balloon lift ratios and wind currents the idea seemed feasible enough. I bought a 600g latex balloon online and started designing a robust space craft out of spare junk in the garage and leftover crap from behind the fridge in the basement.

Ok, so it didn’t quite make it to “Outer Space” Space… but it did make it to approximately 110,000 ft (or 33.5 km) a region defined by Wikipedia as “near Space”. Stable low earth orbit starts at around 160 km… a few kilometers out of my spare parts budget. END_OF_DOCUMENT_TOKEN_TO_BE_REPLACED

The final step in this build was to install the rear wheel bridge and brake mount. I wasn’t really sure about the best way to go about this, but after a few minutes in Home Depot I found a few metal nuts that I could epoxy into the bridge to give the brakes a proper support. After aligning the bridge and the nuts at the right angle I epoxied them in place and wrapped them in hemp. Once it had cured 48hours later I sanded everything down and drilled a hole through the hemp to expose the metal mount for the brake. Perfect fit.

END_OF_DOCUMENT_TOKEN_TO_BE_REPLACED

With a bike jig in place and your head tube, bottom bracket, seat-post and dropouts secured in place, the next step is to start measuring out the bamboo and cutting it to size. You can get the metal components from a frame-building supplier like Nova Cycles or harvest them off a junk frame. Once cut each joint needs to be mitered down so that it fits perfectly and snugly around the component you will be epoxying it to. My bamboo was pretty hard, so I ate through a few dremel bits during the mitering process.

END_OF_DOCUMENT_TOKEN_TO_BE_REPLACED

Bamboo Bike Build – Part 1 – Getting Jiggy With It

I have this thing where when I say that I’m going to do something I inevitably have to do it. No matter how ludicrous or implausible, I’ve just gotta jump in headfirst and hope it works out, somehow it usually does. As it happened, one day in April I realized that I didn’t have a bike… and with no knowledge about how to actually build one I announced that was in fact what I was going to do.

Let’s face it, building a bike out of what is essentially panda-bear food sounds ridiculous. The first question that comes to most peoples minds is “why the heck would you do that?” Bamboo has hundreds of industrial and commercial uses, it’s fascinating stuff, and when it comes to bikes bamboo is actually an excellent frame building material. It’s lighter and stronger than steel/aluminum with better vibration absorbing properties than carbon fiber. I also think that it looks pretty cool. After spending a few weeks researching bamboo tensile strengths, epoxy curing agents, carbon fiber thermal expansion coefficients and a brief refresher on the Pythagorean theory from my tenth grade math textbook I figured I was as ready as I’d ever be to build a two wheeled death trap fit for Gilligan himself.

END_OF_DOCUMENT_TOKEN_TO_BE_REPLACED 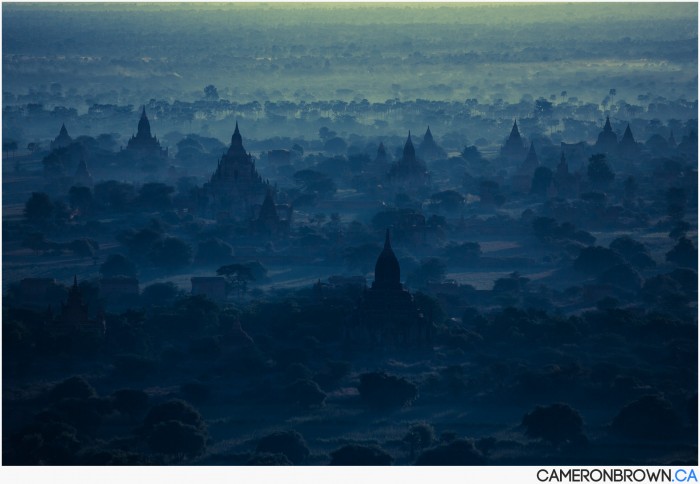 My flight in to Myanmar followed Air Force One in from Bangkok. President Obama was in the region for diplomatic events in Thailand, Myanmar and Cambodia. The major routes around Yangon University were packed with people were out on the streets waving US flags and covering themselves in red, white and blue face paint.
Myanmar (or “Burma” as it’s historically been known) is a country going through a huge transition…
END_OF_DOCUMENT_TOKEN_TO_BE_REPLACED

Butter Tea At Sunrise – Photos from The Kingdom of Bhutan

I just returned back to Vancouver from 4 weeks of traveling through Bhutan and Myanmar (Burma). I also made some short stops in to India and Thailand where I lucked out a bit with timing, as I had a 42 hour layover in India during Diwali, and a 42 hour layover in Thailand during the Loi Krathong Sky Lantern Festival.

Western Bhutan is a difficult country to get in to, but at least they have a functioning airport… even if it is rated as one of the world most dangerous. To get into Eastern Bhutan you need to drive to the border through Assam India, particularly through an area that is known for separatist rebel violence. It’s legal to drive through this part of India with Bhutanese license plates, but it’s not exactly practical. The Bhutanese army has been fighting to flush these rebels out of it’s southern forests for years, and for a few years rebels have been targeting and burning Bhutanese vehicles along the highway. The Indian government sponsors a “complimentary” military convoy to protect vehicles in this region, but it’s slow and only runs certain days if the week.

Despite the issues along the border, Bhutan is a remarkably peaceful country. Driving North into the foothills of the Himalaya, Bhutanese prayer flags begin to raise u

p and litter the sky with colors as they flutter in the wind. Roofs run bright red as hot chilies (a staple ingredient in every meal) are laid out to dry all day in the sun. Monks sip butter tea in immaculate monasteries that were built into rocky cloud level cliff-sides centuries ago. It’s a sort of fairy-tale like place that you’d think couldn’t possibly exist.

Bhutan is interesting in another respect. Democracy is a new concept in the “kingdom” and it did not by the will of the people, but rather by the will of the king. In a very backwards way of thinking, many of Bhutan’s people would rather continue to be ruled by the Monarchy than elect their own officials.

While most countries across the world gauge their success on their annual GDP, the 4th king of Bhutan coined the term “Gross National Happiness” to be the kingdoms measure of success.

END_OF_DOCUMENT_TOKEN_TO_BE_REPLACED

As Canadians we say “eh”, wear a bit too much flannel, and occasionally ride a moose (meese?) to work. There is however one distinctly Canadian pastime that’s is rather elusive to those of us who live in the city. The mysterious art of Maple tree tapping.

Living in a city the idea honestly never crossed my mind… but then one day I realized that the streets of my neighborhood where lined with Maple trees.

Legal disclaimer: I’m not sure what the legal ramifications are for harvesting Maple Sap from city property, they could get sticky. The taste ramifications however are tremendous.

END_OF_DOCUMENT_TOKEN_TO_BE_REPLACED

This afternoon I was greeted with some great news from California. The Indio police department was able to successfully execute a search warrant and retrieved my stolen laptop.

During the second day of Coachella in April, some lowlife managed to get in to my truck and take off with my laptop and cellphone… little did they know that I’ve been diligently tracking them remotely ever since. I didn’t have any fancy theft monitoring software running, and I didn’t have any physical leads, but I was able to trace their IP address through the Google Analytics back-end built in to this website… creepy right?

Analytics is usually used as a market research tool, a great way to see (in broad strokes) where your website traffic is coming from, but as I discovered, if you try hard enough it is apparently much more powerful than just that.

After the thief tried to log in to my Facebook account I was notified via email and I logged his IP address, one that I would later continue to track remotely through server-side IP logs . Through the wonders of Google Analytics I was able to establish enough probable cause to open an investigation. There were too many coincidences, and as such with no photo or video evidence the Indio Police Department were able to subpoena Verizon for the thief’s physical address and retrieve the stolen computer and cellphone.

Going forward I have installed a remote monitoring system on my computer that I can remotely activate and log IP addresses, screenshots, GPS coordinates and keystrokes…  heck I can even take photos of the would be thief via the installed webcam.

I’d like to extend a huge thanks to the Indio police department for their role in returning my stolen property.

Let this be a warning to the three rioters who smashed my camera… The Vancouver Police Department and I know more than you think we do, and you should probably turn yourselves in.

Back in February my aunt told me she had on old tandem cruiser sitting in storage getting rusty. Knowing that I like bizarre projects she thought I should come pick it up. So I stripped it down to bare metal, primed, painted, and put it back together. It comes with brand new seats, new handlebars, and a coconut beverage coozy.

If you’re interested in picking up a vintage tandem cruiser in fully restored condition, shoot me an email.

END_OF_DOCUMENT_TOKEN_TO_BE_REPLACED

I worked a variety of eclectic jobs while living in Australia, from bartending at the Sydney Open Air Cinema, assistant brewing, solar panel sales, hay bailer, and a cameleer. One of the more interesting gigs was a stint I was fortunate to spend working on Sail Yacht EOS for a few months in Fremantle, WA.

Owned by an American billionaire, EOS is a three-masted Bermuda rigged schooner, and the worlds largest privately owned sailing yacht (measuring in at 305 feet). Aside from typical deckhand jobs like scrubbing and shamying everything down, one of my jobs was to sand down a custom built mahogany river tender, re-stain and clear-coat it. This particular job was less than a little nerve wracking considering that that the tender is worth more than $1 Million…